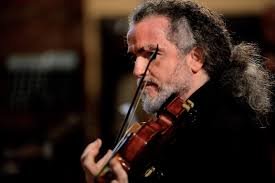 Spyros Gikontis is an associate professor in violin and chamber music at the Music Department of the Ionian University, Greece.

He has participated in numerous concerts as a soloist and as a member of chamber music ensembles in Greece, Cyprus, Italy, Germany, Turkey, Poland, France, Austria (Arnold Schoenberg Center), England (Yorkshire Baroque Soloists), Belgium, Thailand and USA, for which he has received praise by the press. He has recorded for the Greek classical radio as well as for many CDs having a wide repertoire, ranging from baroque to contemporary music. For these recordings he has received praises by the Greek and the international press, such as the one by The Strad magazine.

His artistic activities include performances as well as recordings -many of which debuts- of works by Greek composers (Mantzaros, Robotis, Lialios, Mitropoulos, Papaioannou, Baltas, Dragatakis, Antoniou, Kalogeras, Lekkas and Leotsakos). He has been a founder of the Ionian Camerata and a founder member of the Ionian Early Music Ensemble, the Ionian Chamber Music Ensemble, the Trio Koryfo, the Quintet Mib Astor Piazzola, the Duo Eight Strings and the Duo Zwiegespräche.

He organizes violin and chamber music seminars at the Summer Academy of the Ionian University. As a visiting professor he has given classes and concerts at the International Music Days of Brache in Germany, at the European Parliament in Brussels, at the Music Academy Karol Lipinski in Poland and at Universities of USA (Bowling Green State University, Toledo, William and Mary College in Virginia, Boston University) and of Turkey (Trakya University).  Finally, for many years he is the artistic manager of the Festival “Manos Hadjidakis’s Xanthi”.