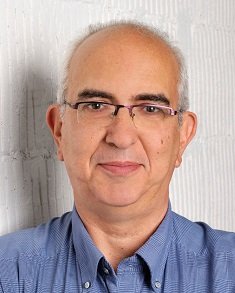 Nikos Tsouchlos was born in Athens in 1961. After studies in music and law in Athens and Paris, he obtained a PhD in Musicology from the Athens University (dissertation topic: Theory and Music Analysis in the work of Ernest Ansermet). Studies in piano with Chr. Partheniadi, in music theory with Jannis A. Papaioannou and in conducting with Alexander Myrat and Sergiu Celibidache led to a professional conducting career initiated in Athens with an assistantship to Manos Hadjidakis at the Orchestra ton Chromaton. Since then, he is regularly guest conducting various orchestras and artistic institutions in Greece and abroad. His special interest in contemporary creation is documented by numerous premieres of new works by Greek composers, as well as by first Greek productions of seminal modernistic music theatre works such as A. Schönberg’s Erwartung or A. Berg’s Lulu. In 1991, he joined Megaron - the Athens Concert Hall as Director of Artistic Programming and subsequently took over the Artistic Direction of this institution, a position he held until 2012. In February 2013, he took over the Presidency of the Athens Conservatoire. From 2014, he is Associate Professor in the Department of Music Studies of the Ionian University. Parallel to his artistic, educational and administrative activities, he has been publishing on questions of musical interpretation. His book on musical performance in Germany from 1750 to 1800, has been awarded the 2011 prize of the Hellenic Association of Theatre and Music Critics. For his various activities in the cultural field, Nikos Tsouchlos has been awarded the distinctions of Chevalier dans l’ordre des Arts et des Lettres (France, 2002) and Cavaliere dell’Ordine della Stella della Solidarietà Italiana (Italy, 2006).