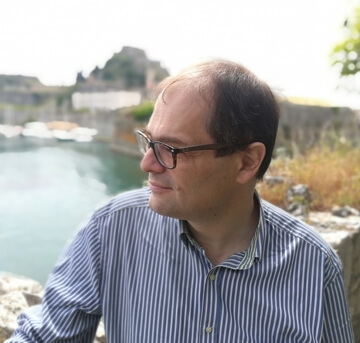 Eustathios Makris (b. 1966) studied musicology at the Aristotle University of Thessaloniki and continued his studies at the University of Vienna, where he specialized in Byzantine music, obtaining the PhD degree in 1996 (supervisor: Prof. Christian Hannick, subject of the dissertation: “The Musical Tradition of the Anastasimatarion in the 16th and 17th centuries”). Other musical studies: advanced music theory (Diploma in Fugue, 1990) and Orthodox church music (Diploma in Byzantine Music, 2000) at the National Conservatory, Athens. Professional activities: Music Librarian at the Music Library of Greece “Lilian Voudouri” (1997-1999), teaching appointment (history and theory of Byzantine music) at the University of Thessaloniki, Department of Music Studies (1999-2001), Music Researcher at the Hellenic Folklore Research Centre of the Athens Academy (2000-2006), Associate Professor of Greek ecclesiastical music at the Ionian University, Department of Music Studies (2006-). In 2006 he founded the vocal ensemble “Corfu Cantors” (“Ionian Harmony” since 2012), whose main purpose is the cultivation and dissemination of the local church music repertoires of the Ionian Islands, focusing especially on the Corfiot tradition.