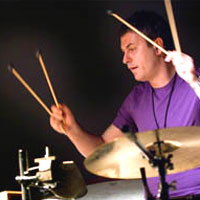 TYPANA Percussion Ensemble is founded by Dimitri Dessyllas, professor of percussion at the “Atheneum” Conservatory of Athens in 1993. In its brief history as a percussion ensemble TYPANA has had an outstanding performing record with an eclectic repertoire championing compositions of John Cage, Steve Reich as well as numerous new works written for variety of percussion instruments. TYPANA was featured in 2004 Olympic Games in Athens and has appeared in Athens’s ‘Megaron’ Hall and in the International Summer Academy in Corfu.