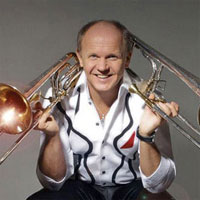 artistry and virtuosity has inspired some of the greatest names within contemporary music to compose major works especially for him. Composers such as Berio, Xenakis, Takemitsu and Turnage are among the composers of the more than 80 trombone concerti that have been dedicated to Christian Lindberg who has given more than 200 compositions altogether their first performances.

Lindberg will perform solo works for trombone, from the early baroque era to the 21st century

Melos Brass Quintet has invited this great artist to Greece and, during this concert, they will perform together one of Lindberg's compositions, entitled "Grand Canyon", as well as a work by Anders Högstedt, entitled "A Night at the Opera", inspired by Verdi, Bizet, Mozart and Puccini music for the Opera.