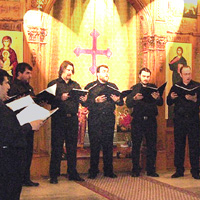 The “Corfu Cantors” musical ensemble is part of the Greek Music Laboratory at the Music Studies Department of the Ionian University. It was created early in 2006 to functionally and artistically support the Laboratory’s special activities dealing with the research, cultivation and promotion of Greek ecclesiastical music in all its expressions, traditional or by Greek composers, with local Ionian Island traditions as its focal point.

The concert programme mainly comprises Corfiot chants, either traditional, or by Greek composers.