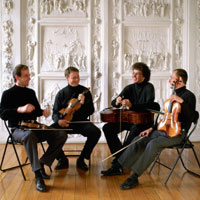 The university community and music-loving Corfiots will have the chance to enjoy a very important concert before the Quartet’s appearance at the Megaron, the Athens Concert Hall, on the next day. The musicians from Leipzig
Andreas Seidel, violin,
Tilman Buening, violin,
Ivo Bauer, viola,
and Matthias Moosdorf , cello,
will present works by Arthur Vincent Lourié, Dimtri Shostakovich and György Ligeti in a concert which no one should miss.

Some critiques from the Quartet’s homepage

, a site well worth a visit:

BBC Music Magazine:
There's a highly expressive German word, Schwung, that signifies a combination of vigour, momentum and swing. That's the quality above all that the Leipzig Quartet brings to Brahms. On the whole the Leipzigers don't drive the music too hard, but there's a motoring energy to the first movements of both Brahms works. And when the Sextet's (op. 36) second theme comes soaring in for the first time the effect is rather like hang-gliding from the top of a mountain. The dark urgency of the Quartet's (0p. 51/1) first movement is just as impressive, and the whole performance has deep seriousness, as well as superb polished precision, that holds the attention right to the end.

The New York Times:
The Quartet presented rich, mellow, unadulterated beauty. They have an urbanity and a sense of elegance, as if their performance were bounded by an invisible gold frame... There was a refreshing kind of emotonial understatement: brilliance and feeling were abundantly present but did not need to be worn on the sleeve.

Penguin Guide 2005/2006:
About Mozart's String Quartets on MDG 307 0936-2:
The Leipzig performances of Mozart's last three quartets are second to none and have all the spontaneity of live music-making …
About Schoenberg's String Quartets on MDG 307 0919-2 and MDG 307 0935-2:
They phrase with great naturalness, their ensemble is perfect and they have great warmth, richness and tonal beauty, though nothing is overstated or projected. If any ensemble could win doubting listeners over this (Schoenberg) repertoire, this is it.